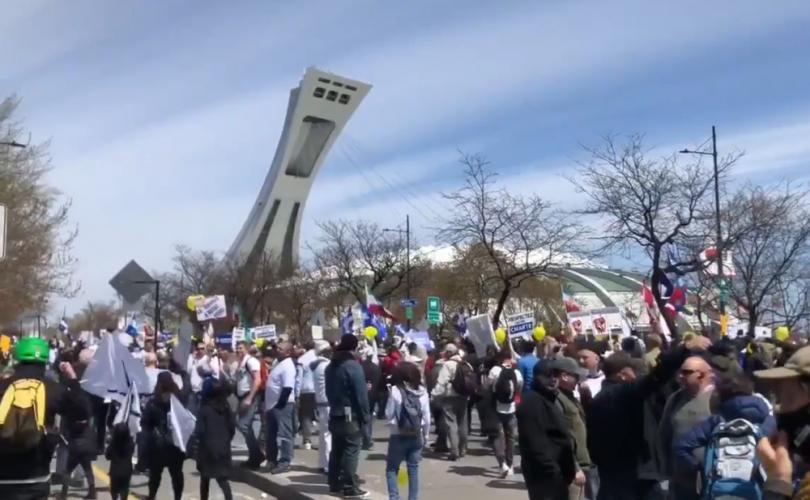 MONTREAL, Quebec, May 3, 2021 (LifeSiteNews) — An estimated 100,000 people gathered in Montreal on Saturday to protest draconian COVID lockdown rules, in what was the biggest Canadian anti-COVID march seen to date.

The protest took place in the city of Montreal, Quebec, the largest French-speaking city in Canada, and saw protestors gather near the Olympic Stadium before taking to the streets on a planned route.

According to a Rebel News report of the protest, the demonstration was “downright festive” in nature, with many people shouting cries of “Liberté.”

It was also a mostly peaceful affair, despite there being a few altercations “AFTER the anti-lockdown demonstration had concluded,” Rebel News emphasized.

The protest was planned and coordinated by a group called “Quebec Debout,” whose Facebook page posted video of Saturday’s event. The page stated that “100,000 people stood up to challenge health measures today in Montreal.”

Montreal Police were on site at the protest, handing out tickets for masking non-compliance to some protestors, according to a CTV report.

Former federal MP and leader of the People’s Party of Canada (PPC) Maxime Bernier, who has been a vocal opponent to COVID-19 lockdown measures in Canada, attended the protest, saying “enough is enough” when it comes to lockdowns.

“I think we have almost 100,000 people here fighting, that’s fighting to your free — for our freedom … We are sending a strong message to these establishment politicians: Enough is enough, we must stop these draconian lockdowns right now,” said Bernier in a video message posted to his Twitter page.

The CTV report of the protest chided the fact that a COVID-19 “vaccination site” near the stadium had to be closed down because of the protests, which affected some “50” appointments.

However, Bernier countered that “the lying mainstream” media was sensationalizing what really happened at the “vaccine” site.

“This is pure bullsh-t from the lying mainstream media. The demonstration was publicized weeks ago, nothing was disrupted, the regional health care center simply decided to reschedule some vaccination appointments. DON’T BELIEVE THE FAKE NEWS!” tweeted Bernier.

Many of the protesters held signs blasting the idea of so called “vaccine passports,” which have in recent weeks been the topic of discussion in Prime Minister Justin Trudeau’s government.

Last week, Trudeau said his government is “right now” working on “certificates of vaccination” for travel with its allies, saying they are to be “expected.”

The province of Quebec has some of the strictest COVID-19 lockdown rules in place in Canada. The entire province has been under a curfew for months, with the current one being in force from 9:30 pm. to 5:00 a.m. for most of the province.

Multiple protests have taken place in Montreal and other parts of Quebec ever since the start of the COVID-19 crisis last year.

In mid-April of this year, Rebel News reporters were arrested after confronting police for attempting to raid the team’s temporary office located on a boat in Montreal.

The Rebel News team was onsite in Montreal to cover ongoing COVID lockdown protests, as well as to report on how the local police force has been enforcing a curfew which has been in place for months.

Ezra Levant, the founder of Rebel News, was present at the confrontation on Saturday. He said that dozens of police showed up at the team’s Airbnb boat.