Professor Adrian Hill describes the efforts to create a vaccine as a “race against the virus disappearing, and against time”. 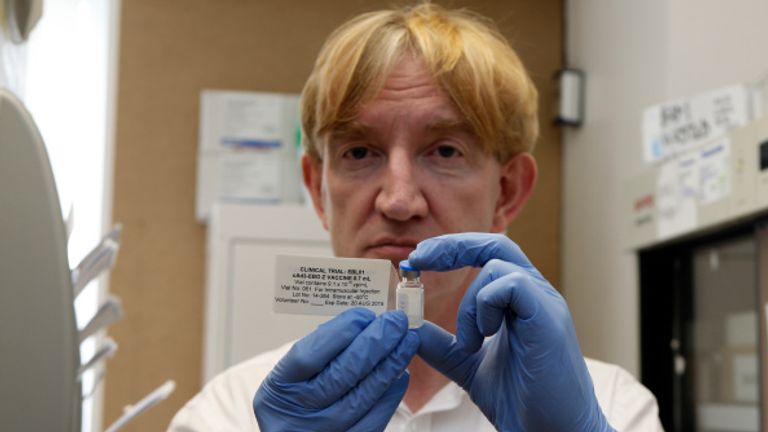 There is only a 50% chance of the Oxford coronavirus vaccine working because cases in the UK are declining so fast, one of the scientists behind it has warned.

The University of Oxford’s Jenner Institute and the Oxford Vaccine Group began developing aCOVID-19 vaccine in January using a virus taken from chimpanzees.

But with the number of UK coronavirus cases dropping every day, there may not be enough people to test it on, according to the institute’s director Professor Adrian Hill.

He told The Sunday Telegraph: “It’s a race against the virus disappearing, and against time. We said earlier in the year that there was an 80% chance of developing an effective vaccine by September.

“But at the moment, there’s a 50% chance that we get no result at all. We’re in the bizarre position of wanting COVID to stay, at least for a little while.”

On Saturday, 282 people were reported to have died of the virus in the UK across hospitals, care homes and the community.

The figure has fallen dramatically since the peak of Britain’s outbreak, when almost 1,000 people were dying every day in hospitals alone.

Trials of the vaccine – officially known as ChAdOx1 nCoV-19 (pronounced Chaddox One) – began with an initial phase of testing on 160 healthy volunteers between the ages of 18 and 55 to see if it could effectively fight off the virus.

The study is set to progress to a second and third phase, which will involve testing up to 10,260 people and expanding the age of participants to include children and the elderly.

But if not enough people are able to catch the virus, scientists will not have enough evidence to prove it is effective and roll it out for NHS use.

ChAdOx1 nCoV-19 is made from ChAdOx1, a weakened version of the common cold virus (adenovirus) which causes infections in chimpanzees.

The virus has been manipulated so that it cannot harm humans, but also contains part of the coronavirus so that it would trigger the body’s immune response to COVID-19’s spike proteins which it uses to enter human cells and multiply.