Former VP Can’t Admit To Anything, Lies About Confirmed Facts 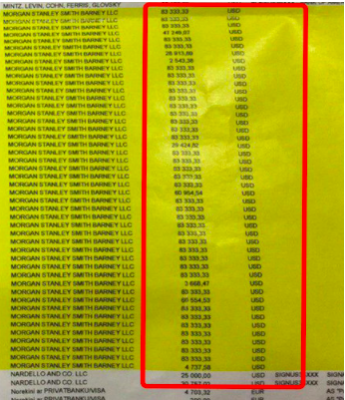 Wires from Burisma to Hunter Biden

CONFIRMED – Joe Biden is a liar.

Last night’s debate between President Donald Trump and the Democratic Presidential Nominee, Joe Biden, was raucous and at times hard to watch. However, it confirmed one thing — no matter who you will vote for, you must admit Joe Biden is a liar.

The lies were so numerous they were difficult to count. However, we want to focus on two.

Biden says the evidence his son was paid over $3.5 million from a Ukrainian organized crime head and owner of the Burisma group of gas companies (while Joe Biden was appointed by Obama as head of anti-corruption in Ukraine and distributing American aid money) was false. That is a lie. Joe Biden sold his influence.

See the image above. Those are the list of the individual wires CDMedia broke in the news in November of last year. They are from Burisma to a Morgan Stanley account in the U.S. controlled by Hunter Biden.

There is evidence of many more payments to Hunter, and Joe Biden as well from Burisma, to the tune of over $12 million. You can read all or our investigative work on Biden crime family corruption here in our Investigations section. There are over 70 articles since Nov, 2019.

The second whopper Biden told was that he never called member of the U.S. military…stupid bastards. Well, judge for yourself.

Below is the video of Joe Biden calling the military ‘stupid bastards’ in a speech during the Obama Administration.

Yes, confirmed…Joe Biden is a liar.