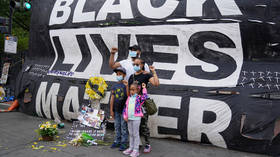 The Black Lives Matter activism group has deleted a page called “What We Believe” from its website, disappearing such objectives as disrupting the “Western-prescribed nuclear family structure” as the Nov. 3 election nears.

The manifesto was published on BLM’s “What We Believe” page at least as long ago as on February 2 but was no longer available as of last Friday. The page is now blank, except for an error message indicating that it can’t be found.

BLM gave no explanation for its missing manifesto; nor did it offer a comparable replacement, forcing all those curious about the movement’s goals to go to an “about” page, which, in rather general terms, explains its mission to eradicate white supremacy and “intervene in violence inflicted on black communities.” It does not, however, include a belief, featured in the original manifesto, that “the nuclear family structure” should be consigned to the dustbin of history.

“We disrupt the Western-prescribed nuclear family structure requirement by supporting each other as extended families and villages that collectively care for one another, especially our children, to the degree that mothers, parents and children are comfortable,” the now-vanished-without-a-trace manifesto stated.

The group also spoke out at length against “heteronormative thinking,””patriarchal practice,” men-centered environments and “cisgender privilege,” among other peeves, while repeatedly referring to the supporters of the movement as “comrades.”

Whether BLM made an unlikely turnaround, or concluded that now is not a good time for a list of its core beliefs to be made readily available to anyone with a Web connection, is up for speculation.

Twitter users erred on the side of temporary concealment over any change in values. One said, “They still want it — they just put it on the secret menu.” Another said, “They decided it does not poll well,” while still another said, “The last thing they want is for anybody to know what they’re really all about.”

BLM enjoyed strong public support when a wave of anti-racism protests across the nation began following the May 25 death of George Floyd in Minneapolis police custody, but its popularity has faded as initially peaceful protests against police brutality descended into riots, arson and outright violence. A Politico-Morning Consult poll published earlier this month showed that 52 percent of respondents had a favorable view of BLM, down from 61 percent in June.

Coincidentally, the page disappeared at just about the same time as the New York Times quietly changed the introduction for its controversial 1619 Project, a revisionist tale of US history that President Donald Trump decried as an anti-American, “twisted web of lies.” Without posting a correction or clarification, the Times removed the central claim and namesake point of the project – the assertion that America’s true founding was in 1619, not 1776.