In the summer of 2020, the Center for Science in the Public Interest (CSPI) — a consumer advocacy group partnered with Bill Gates’ agrichemical PR group, the Cornell Alliance for Science,1 and bankrolled by billionaires with ties to Monsanto, the Gates Foundation, the Rockefeller Foundation, the Rockefeller Family Fund and Bloomberg Philanthropies2 — launched a social media campaign to put an end to Mercola.com.

July 21, 2020, CSPI issued a press release3 in which they accused me of falsely claiming “that at least 22 vitamins, supplements and other products available for sale on his web site can prevent, treat, or cure COVID-19 infection.” This despite the fact that their Appendix of Illegal Claims4 clearly show no COVID-19-related claims exist on any of the product links.

The group also testified in a Senate hearing on the topic of COVID-19 scams and urged the U.S. Food and Drug Administration and the Federal Trade Commission to take regulatory action against me.

In an August 12, 2020, email, CSPI president Dr. Peter Lurie5 — a former FDA associate commissioner6 — made the spurious claim that I “profit from the COVID-19 pandemic” through “anti-vaccine fearmongering” and reporting of science-based nutrition shown to impact your disease risk.

Seeing how Lurie is a former FDA official, it’s disheartening, but not surprising, that the FDA has now issued us a warning letter7 for “Unapproved and misbranded products related to COVID-19.” Lurie has publicly taken credit for the FDA’s action,8 thereby establishing the potential that CSPI is pulling strings under the new administration through relationships they did not have back in August when they first launched their assault on my free speech.

According to the FDA, vitamin C, vitamin D3 and quercetin products are “unapproved new drugs sold in violation of section 505(a) of the Federal Food, Drug, and Cosmetic Act.” The agency is also listing Mercola.com on its Fraudulent COVID-19 Products page.

Lurie seems to be hinting that he also wants federal authorities to remove my StopCOVIDCold site, where you can download a free scientific report detailing the benefits of maintaining appropriate vitamin D levels to protect against viral infections. He’s also urging “state attorneys general to investigate how they may further protect consumers from Mercola’s illegal marketing.”9

“Americans are justifiably concerned about becoming infected with the coronavirus and contracting COVID-19. Being misled to believe that supplements could prevent or treat COVID-19 could cause consumers to fail to take protective measures such as mask-wearing, putting themselves and others at risk, or fail to seek actual medical treatment if sick,” Lurie writes.10

It’s ironic that Lurie dismisses offhand peer-reviewed published science demonstrating certain nutrients can boost your immune function and help lower your risk of severe infection — be it from SARS-CoV-2, the seasonal flu or anything else — and touts mask wearing, which has no published scientific evidence to back its universal use, as one of the most important prevention strategies against COVID-19.

Sadly, this is where we are nowadays. “Trust the science,” they say, while simultaneously promoting scientifically unverified claims and trying to eradicate anyone who simply reports the findings that are actually published in the medical literature that may negatively impact the pharmaceutical industry.

In October 2020, I co-wrote a paper together with William Grant, Ph.D.,11 and Dr. Carol Wagner,12 both of whom are on the GrassrootsHealth vitamin D expert panel, demonstrating the clear link between vitamin D deficiency and severe cases of COVID-19. This paper was published in the peer-reviewed medical journal Nutrients.13

With that, I have established my medical and scientific merit, and will continue to express my professional opinions, based on the available science, and defend my freedom of speech as the U.S. Constitution provides for.

The FDA’s warning letter highlights statements in articles on my website that are fully referenced and supported by published science. I am committed to providing truthful information, for free, to anyone that wants it, and I’m all for having a rigorous scientific debate when necessary. CSPI has taken credit for pressuring the FDA to issue this warning letter to suppress free speech. The FDA’s warning letter is simply another attempt by CSPI to smear me with false accusations.

If scientists and researchers are publishing these studies, how can it be a crime to report their findings? At the end of the day, the CSPI’s attacks on this website amounts to an effort to suppress science itself.

As CSPI well knows, thanks to the U.S. constitution and the first amendment, I have every right to speak publicly on matters regarding health, so this is nothing but another attempt to “cancel” me while concealing its own duplicity. For the record, we have fully addressed the warning letter; the FDA cannot simply stop free speech that CSPI does not like.

This Is NOT the First Time CSPI Has Endangered Public Health

CSPI continues to be a vitamin D denier even though overwhelming evidence points to its ability to reduce the risk of developing severe COVID-19. This isn’t surprising, coming from a Rockefeller-funded organization that pushed deadly trans fats on the American public until the facts became undeniable, at which point they simply rewrote the organization’s history on this subject to hide its past stance.

In 1986, CSPI described trans fat as “a great boon to Americans’ arteries.”14 Two years later, in 1988, they still praised trans fats,15 saying “there is little good evidence that trans fats cause any more harm than other fats” and that “much of the anxiety over trans fats stems from their reputation as ‘unnatural.'” Meanwhile, in the real world, the CSPI’s highly successful trans fat campaign resulted in an epidemic of heart disease.

The CSPI’s role in the promotion of trans fats and its influence on the food industry was discussed in David Schleifer’s article, “The Perfect Solution: How Trans Fats Became the Healthy Replacement for Saturated Fats,”16 in which he noted that:

“Scholars routinely argue that corporations control US food production, with negative consequences for health … However, the transition from saturated to trans fats shows how activists can be part of spurring corporations to change.”

It wasn’t until the 1990s that CSPI started reversing its position on synthetic trans fats, but the damage had already been done, and it never admitted its error. In fact, rather than openly admitting it had misled the public with erroneous claims, CSPI simply deleted sections of its previous support of trans fat from the web.17 Notice how their historical timeline18 of trans fat starts at 1993 — the year CSPI realized the jig was up and they had to support the elimination of trans fat.

CSPI then started raising money for campaigns to stop the heart disease causing substance they first promoted. How diabolical is that? Create the problem and then take money from others for the solution. 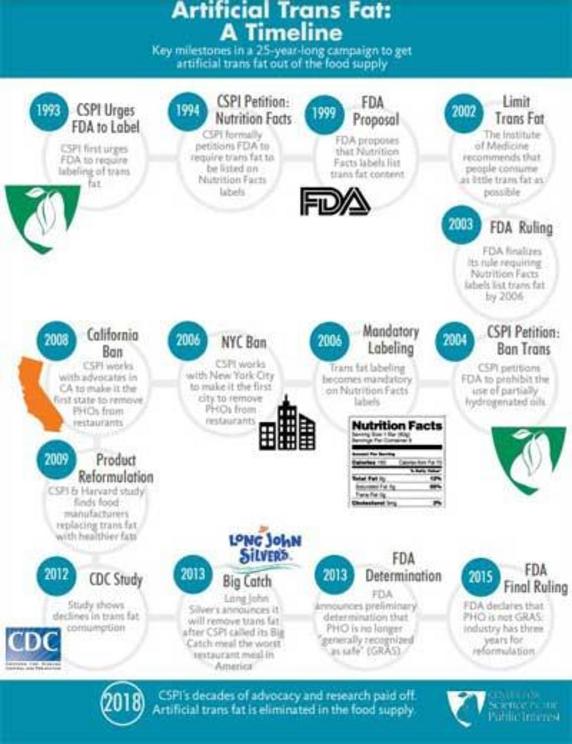 “On October 20, 1993, CSPI had the chutzpah to call a press conference in Washington, DC and lambast the major fast-food chains for doing what CSPI coerced them into doing, namely, using partially hydrogenated vegetable oils in their deep fat-fryers.

On that date, CSPI, an eager proponent of partially hydrogenated oils for many years, even when their adverse health effects were apparent, reversed its position after an onslaught of adverse medical reports linking trans fatty acids in these processed oils to coronary heart disease and cancer …

Thanks to CSPI, healthy traditional fats have almost completely disappeared from the food supply, replaced by manufactured trans fats known to cause many diseases. By 1990, most fast food chains had switched to partially hydrogenated vegetable oil …

Who benefits? Soy, or course … [and] in CSPI’s January, 1991 newsletter, Jacobson notes that ‘our effort was ultimately joined … by the American Soybean Association.'”

Even more egregious is the CSPI’s continued recommendation to eat unsaturated fats like soy and canola oils20 and avoid butter and other healthy saturated fats, saying that “changing fats doesn’t lower the risk of dying.”21

This tendency to fall in line with industry science and propaganda has become a trend within CSPI. For example, it wasn’t until 2013 that CSPI finally downgraded the artificial sweetener Splenda from its former “safe” category to one of “caution.”22

In 2016, they downgraded it again, from “caution” to “avoid.”23 Despite that, CSPI continues to promote diet soda as a safer alternative to regular soda, saying it “does not promote diabetes, weight gain or heart disease in the way that full-calorie sodas do.”24

The group has also taken a strong pro-GMO stand and actively undermined the GMO labeling movement,25 which resulted in the U.S. being the only country in the world that does not have clear GMO labeling. In August 2001, the organization actually urged the FDA to take enforcement action against food companies using non-GMO labels, claiming such labels could “deceive consumers.”26

In a similar vein, the group opposes clear labeling of ultraprocessed fake meat. In a May 2018 letter to the FDA,27 CSPI urged the agency “to reject efforts by the United States Cattlemen’s Association to prohibit use of the terms ‘meat’ or ‘beef’ on plant-based and cultured proteins marketed as alternatives to traditional meat.” All in all, it appears the CSPI is completely against the idea of a well-informed public.

The CSPI has also been a promoter of the thoroughly debunked low-fat myth. In 1995, they launched a “1% or Less” campaign that urged everyone over the age of 2 to switch from whole and 2% milk to skim milk (also known as nonfat or fat-free milk) in order to reduce their saturated fat intake.28,29,30

It was another successful campaign that resulted in the doubling of skim milk sales.31 However, just like their trans fat campaign, this was equally ill advised, seeing how research32,33 shows full-fat dairy actually lowers your risk of death from diabetes and cardiovascular causes such as stroke.

Considering the suspected, and in some cases well-verified, health hazards of trans fats, artificial sweeteners, soy, GMOs, low-fat diet and fake meat, CSPI’s intent to protect and advance public health is questionable to say the least.

It seems they’re more interested in protecting profitable industries, and the CSPI’s efforts to destroy companies selling vitamins and supplements with natural antiviral effects34 is simply more evidence of that.

The fact is, they’re seeking to bring an end to Mercola.com because we are such a serious threat to their agenda and they want to eliminate as many of the truth tellers as they can.