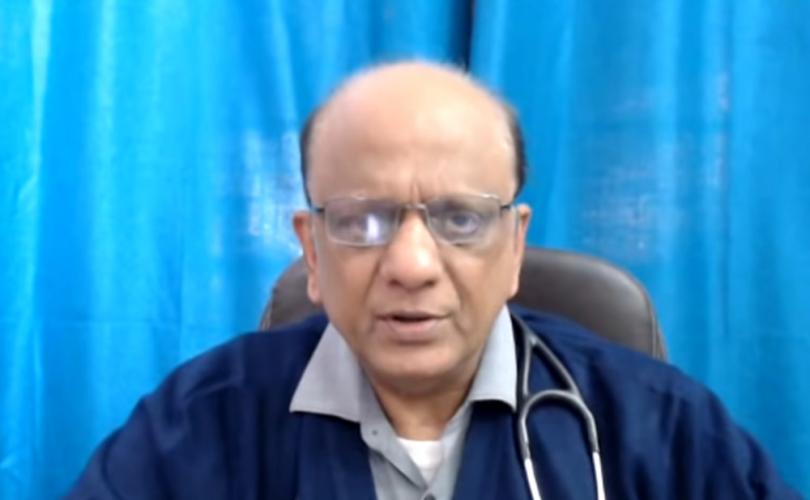 Dr. K. K. Aggarwal died May 17 following complications arising from a bout of COVID-19 despite being ‘fully vaccinated.’

NEW DELHI, India, May 25, 2021 (LifeSiteNews) — One of India’s most eminent cardiologists has died after falling ill with COVID-19 just months after receiving his second shot of the experimental jabs.

Dr. K. K. Aggarwal, formerly the President of the Indian Medical Association and head of the Heart Care Foundation India (HCFI), died May 17 following complications arising from a bout of COVID-19 despite being “fully vaccinated,” according to national reports in Indian news. The physician was the recipient of one of India’s most prestigious national awards, the Padma Shri, recognizing his distinguished contribution to the field of medicine in India.

Ten days before he died, an official Twitter statement detailed Aggarwal’s admission to “a healthcare facility in Delhi,” the AIIMS hospital, where he was put on ventilation. On May 14, an updated Twitter status notified followers that “Dr. Aggarwal is currently battling a serious bout of COVID-19 infection.” Three days later, members of his team at the HCFI announced the 62-year-old’s death “after a lengthy battle with COVID-19” in an official statement on Aggarwal’s Twitter account.

Aggarwal had reportedly received his vaccine shots some time in February and March, according to his colleagues, meaning he would have received either the Indian-made Covaxin jab or the Covishield formula, the latter being India’s branding of Oxford/AstraZeneca’s problematic vaccine.

Aggarwal created instructional videos for his Facebook and Twitter accounts, offering medical advice on treating COVID and many other ailments. In one of his last uploads, posted April 27, the late cardiologist informed viewers that he was to receive a CT scan, bringing with him “three masks and a face shield.”

He explained that, though having “received two doses of the vaccine,” he developed “a classical breakthrough COVID,” the Indian Express reported.

After receiving the results of his scan, Aggarwal proceeded to upload a follow-up video in which he explained that his “CT scan is normal. Don’t be afraid of vaccination. It will ultimately prevent you against severe COVID.”

Reports of breakthrough cases of COVID-19 — contraction of the virus more than a fortnight after receiving a full vaccine prescription — are on the rise. Last month the Centers for Disease Control and Prevention (CDC) reported 5,800 breakthrough coronavirus cases, including 396 hospitalizations and 74 deaths. Prior to the CDC’s announcement, officials at the Michigan Department of Health and Human Services confirmed 246 breakthrough cases, including three deaths.

Last week Bill Maher was forced to cancel his weekly HBO show after testing positive for the virus, despite having received two doses of a COVID vaccine a few weeks prior. The host was reportedly “asymptomatic and feels fine.” In addition, nine members of the New York Yankees tested positive for COVID-19, all of whom had received the single-shot Johnson & Johnson vaccine in April.

Megan Redshaw of Children’s Health Defense noted the importance of the CDC’s new guidance regarding breakthrough reports, explaining that an alteration to the way PCR tests are carried out for vaccinated people will play a significant role. PCR testing amplifies traces of viral RNA to detectable levels in order to establish the existence of a pathogen in the individual tested (though it does not distinguish between activity, dormancy, or even dead strands). In order to amplify to the point of detection, the sample undergoes many cycles until a determined endpoint is established, known as the cycle threshold (CT).

The CDC updated its guidance for vaccinated patients only, reducing the CT to 28 cycles instead of the 35 performed on samples from unvaccinated people. According to worldwide medical experts, if SARS-CoV-2 is detected within 35 cycles, then the patient is considered to carry the pathogen. COVID czar Dr. Anthony Fauci has adopted a 35-cycle recommendation too.

Consequently, reducing the number of cycles could lead to missed positive cases of the virus appearing in vaccinated individuals, distorting any figures the CDC might publish.

COVID-19 is far from the only adverse event reported following vaccination against the virus. In fact, a total of 227,805 adverse events have been recorded on the CDC’s Vaccine Adverse Event Reporting System (VAERS) between December 14 (when the COVD jabs first hit the market) and May 14.

A staggering 4,201 reports of death have been made in the days and weeks following a COVID vaccine, as well as 18,258 “serious injuries,” including cardiac disorders, Guillain-Barré syndrome (a serious nervous disorder), Bell’s palsy, anaphylaxis, and blood clotting.