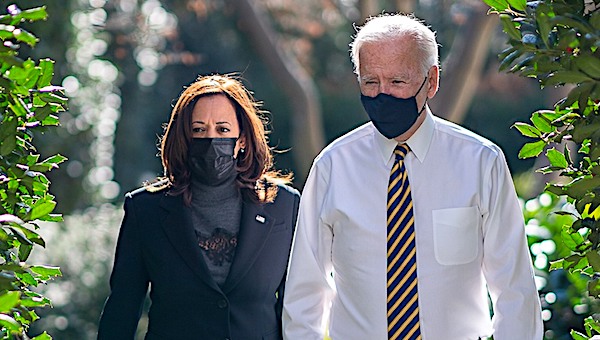 A graph that overlays data from surveys on mask usage with the number of coronavirus cases confirms studies that indicate the face coverings have no significant impact on the spread of the coronavirus.

Using data culled from YouGov.com and the Covid Tracking Project from March 20, 2020, to March 3, 2021, economist Brian Westbury created the chart and posted it on Twitter.

Surveys showed mask usage reached about 80% by midsummer last year and has remained consistent since then. During that period, however, the number of daily positive cases rose and fell precipitously.

Many epidemiologists have noted the coronavirus, in a second major wave, is following the bell-shaped pattern of epidemics predicted by Farr’s Law in 1840, regardless of mitigation efforts. 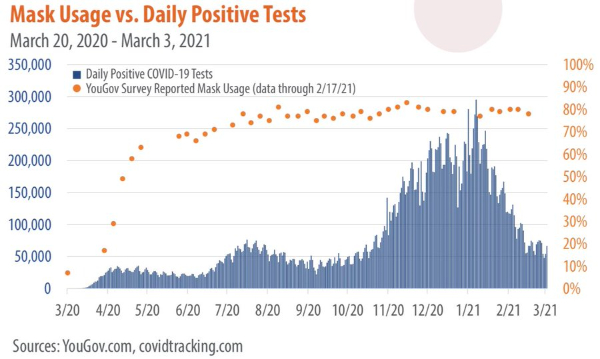 On Tuesday, Texas Gov. Greg Abbott announced his state will open “100%” next Wednesday and end the statewide mask mandate, arguing cases and hospitalizations have dropped precipitously, vaccines are being distributed and “too many Texans have been sidelined from employment opportunities” and “too many small business owners have struggled to pay their bills.”

By the end of the week, at least six other states followed with significant moves.

On Thursday, Alabama Republican Gov. Kay Ivey extended her state’s mask order for another month but said it will end for good April 9.

California will allow Major League Baseball and theme parks such as Disneyland to host live shows at reduced capacity on April 1.

Axios reported the Centers for Disease Control is allowing shelters handling child migrants to expand to 100% capacity, abandoning a COVID-19 requirement to stay at 50%.

Former White House coronavirus adviser Dr. Scott Atlas explained in a recent interview why widespread use of masks is ineffective as a public policy.

In November, as WND reported, the first large, randomized controlled trial of its kind showed no statistically significant difference in COVID-19 cases between people who wore masks and those who did not.

In October, an analysis of a dozen graphs charting the number of COVID-19 cases in countries and U.S. states confirmed the conclusions of recent studies that mask mandates had no effect on the spread of the disease.

A study by the Centers for Disease Control in October indicated that Americans were adhering to mask mandates, but they didn’t appear to have slowed or stopped the spread of the coronavirus. And further, it found, mask-wearing has negative effects.

In March 2020, White House coronavirus adviser Dr. Anthony Fauci said in a “60 Minutes” interview that in general, “people should not be walking around with masks.”

“Right now in the United States, people should not be walking around with masks.

“You’re sure of it? Because people are listening really closely to this,” he was asked.

“There’s no reason to be walking around with a mask. When you’re in the middle of an outbreak, wearing a mask might make people feel a little bit better and it might even block a droplet, but it’s not providing the perfect protection that people think that it is. And, often, there are unintended consequences – people keep fiddling with the mask and they keep touching their face.”

A change in ‘the consensus’

The Association of American Physicians and Surgeons has compiled a page of “Mask Facts” that explains the basic science behind mask-wearing and summarizes a variety of studies.

It shows that the consensus prior to the coronavirus pandemic was that the effectiveness of mask-wearing by the general public in slowing the spread of a virus is unproven, and there’s evidence it does more harm than good.

On April 6, 2020, the World Health Organization said the “wide use of masks by healthy people in the community setting is not supported by current evidence and carries uncertainties and critical risks.” Just two months, later, however, as the pandemic surged, the WHO changed its stance without providing any evidence with randomized controlled trials.

On March 5, the Centers for Disease Control said masks “are usually not recommended in “non-health care settings.”

But on Aug. 7, the CDC said it “recommends that people wear masks in public settings and when around people who don’t live in your household, especially when other social distancing measures are difficult to maintain.”