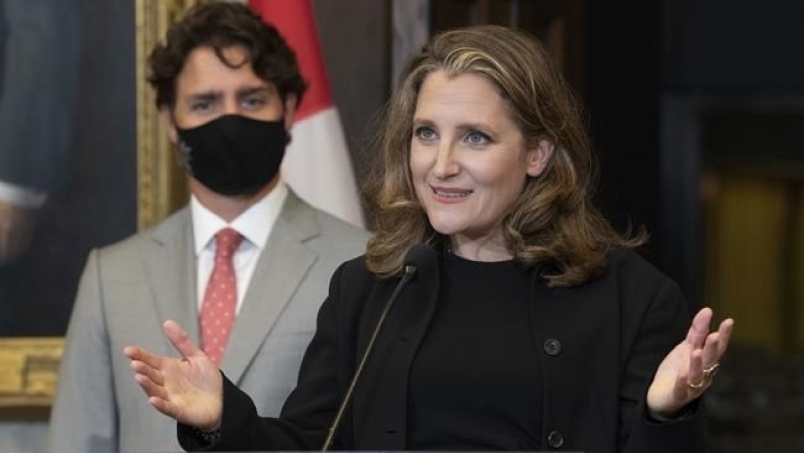 The letter has Trudeau tell Freeland, who also serves as his deputy prime minister, that she should use “whatever fiscal firepower” is needed over the coming weeks and months until the economy recovers from the pandemic and its related shutdowns.

But in doing so, Trudeau writes, Freeland must “avoid creating new permanent spending.”

He adds that any plan to regrow the economy must be guided by a budgetary goal to make sure spending doesn’t go adrift, known in official Ottawa as a “fiscal anchor” that the Liberals have jettisoned as the economy went into a downward spiral.

The details are contained in updated mandate letters the Prime Minister’s Office published Friday afternoon, months after it reset the parliamentary agenda with a late-September throne speech.

In a December interview with The Canadian Press, Trudeau chalked up the delayed release of the ministerial marching orders to ongoing changes to federal programs and plans that meant the letters kept needing revisions.

Trudeau said then that at some point, he was just going to have to make them public.

In the letters, Trudeau noted the new marching orders come on top of those given to ministers shortly after the Liberals won a minority mandate in the 2019 federal election.

The letters touch on a number of subjects, from ordering Justice Minister David Lametti to introduce legislation to address systemic issues in the justice system impacting Indigenous Peoples and Black Canadians, to having Seniors Minister Deb Schulte draft new Criminal Code penalties to elder abuse and neglect. The letter for Foreign Affairs Minister Marc Garneau, who was sworn into the new role Tuesday, says Canada-U. S. relations is a top priority.

The letters also make repeated references to greening the Canadian economy. The one for Freeland includes an order that she work on a border carbon adjustment that would essentially impose duties on goods from countries that don’t have a price on pollution.

Public Safety Minister Bill Blair is being asked to take action on online hate and extremism in Canada, Health Minister Patty Hajdu to work with provinces on setting national standards for long-term care, and Procurement Minister Anita Anand to get enough COVID-19 vaccines for the country. New Transport Minister Omar Alghabra is tasked with ensuring travellers get refunds for flights cancelled due to the pandemic, but his letter does not mention relief for airlines other than support for “regional air infrastructure.”

But it’s the government’s jump in spending that Trudeau notes in each letter before diving into specifics for each minister.

Unprecedented spending on pandemic aid has rocketed the deficit to an expected $381.6 billion this fiscal year, but the Finance Department has warned it could close in on $400 billion due to the return of widespread lockdowns.

TD Economics, in an end-of-week note, said the economy has entered 2021 on wobbly footing and could suffer a small contraction in the first quarter, even if the ramp up in vaccinations offers hope of a rebound in the second half of the year.

When that happens, the Liberals have promised to spend up to $100 billion on a recovery package that is on Freeland’s to-do list, along with preserving the country’s “fiscal advantage.”

“The government has significantly increased spending during the pandemic in order to achieve our most pressing priority: to help protect Canadians’ health and financial security,” Trudeau wrote.

“Going forward, we must preserve Canada’s fiscal advantage and continue to be guided by values of sustainability and prudence. Therefore, our actions must focus on creating new jobs and supporting the middle class to preserve the strength of our economy.”

This report by The Canadian Press was first published Jan. 15, 2021.