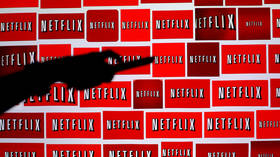 Celebrity cheerleader Jerry Harris, a performer from the Netflix reality series ‘Cheer’ who rose to stardom this year and even interviewed Joe Biden, has been charged with producing child pornography.

Harris, 21, was arrested and charged by the FBI on Thursday following an investigation into allegations he solicited photos and sex from minors.

Federal court records show Harris admitted to agents that he solicited and received explicit messages through Snapchat from 10 to 15 individuals, all of whom he knew were minors. He also admitted to paying a 17-year-old for nude photos, and allegedly had sex with a 15-year-old at a cheering competition last year.

A criminal investigation into Harris was launched after 14-year-old twin brothers Charlie and Sean, whose last names are being kept private because they are minors, came forward with allegations Harris had sexually harassed both online and at cheer competitions for more than a year, starting when they were 13 and he was 19.

Messages reportedly include Harris requesting nude photos and sex from the two boys.

Their mother filed reports with the Forth Worth, Texas, police in July and then with the FBI in August. The FBI initiated a search warrant on Harris’ home in Naperville, Illinois, on Monday.

A spokesperson for Harris previously denied allegations against him in a statement to TMZ, saying “we are confident that when the investigation is complete the true facts will be revealed.”

Harris gained international attention and acclaim on social media when ‘Cheer’ premiered on Netflix in January. He was praised as one of the more outgoing and positive personalities on the cheerleading competition series.

The cheerleader saw such a rise in stardom, that he hosted an Instagram conversation with presidential hopeful Joe Biden in June, a post that has now been deleted. The exchange was part of Biden’s voter outreach campaign in getting young people to register to vote.

“I had the opportunity to speak with Vice President @JoeBiden a few days ago about some really important issues facing our country right now, in particular young adults and the Black community,” Harris wrote at the time.

Harris’ arrest has not helped Netflix’s public image problem at the moment, mainly stemming from the release of the highly-controversial ‘Cuties’, a film some have described as child pornography for its depiction of minors twerking and dancing in suggestive outfits for adults. The streaming service’s marketing of the series, which put the children and the outfits front and center, has also been criticized.

The ‘Cuties’ controversy escalated on the same day as Harris’ arrest with over 30 Republican congressmen signing a letter, obtained by The Daily Caller, demanding the Department of Justice prosecute the streaming giant for the distribution of “child pornography” and “visual fodder for pedophiles.”

“‘Cuties’ clearly meets the United States’ legal definition of child pornography,” the letter reads. “‘Cuties’ contains, ‘a scene where an 11-year-old girl dressed in a tank and panties is splashed with water and begins twerking in a frenzied kind of way,’ and numerous other, equally distressing depictions of minors including the display of an 11-year-old child’s bare breast.”

“To us, and to the vast majority of Americans, it’s deeply upsetting to see a mainstream media company promote the sexualization of children,” they add.