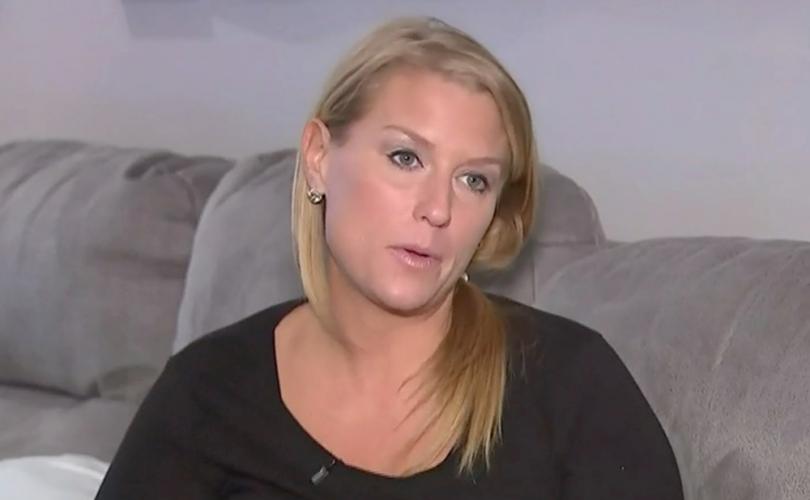 NASHVILLE, Tennessee, May 11, 2021 (LifeSiteNews) – A woman in Nashville is the second person to describe how she became paralyzed within hours of taking a Pfizer coronavirus vaccine.

“This has been a nightmare,” Brandy McFadden told WSMV-TV’s News 4 Program in Nashville as she fought tears. “I got my shot, just trying to do due diligence. I never expected this to happen, at all.”

The day Brandy McFadden got her second dose of the Pfizer/BioNTech vaccine on April 16, she “just started not feeling great,” she told the local news station.

By the following afternoon, McFadden said she couldn’t walk and had excruciating neck pain. “It just started progressively getting worse and I just started screaming in pain at the top of my lungs.”

McFadden’s husband took her to the emergency room at Vanderbilt University Medical Center. Six days later, the local news stations interviewed her at the hospital where she had undergone a CT scan, MRI, EMG, and blood work, all of which were unrevealing about what was happening to her. “As far as to answers as to why this happened, they don’t know,” McFadden told News4.

She had regained movement in her arms, and could wiggle her toes one week following her shot.

A similar case in Pittsburgh

McFadden was in touch with a woman in Pittsburgh who had a similar experience. Rachel Cecere, 33, told WPXI-TV news that she woke up paralyzed from the neck down 12 hours after her first dose of Pfizer’s COVID-19 vaccine.  “It was the scariest thing in the world to go to sleep completely fine, to wake up 1:30 in the morning and not be able to move at all,” the woman told Channel 11.

Cecere was moved from her local hospital to the Cleveland Clinic where tests ruled out Guillain Barré Syndrome, a neurological disease linked to the pandemic 1976 swine flu vaccine, which caused about 450 people to be paralyzed.

“There is just nothing they can find wrong with me. No underlying conditions, I have nothing in my history and they are basically telling me, ‘You’re healthy and we can’t figure out why this is going on,'” the woman told her local news channel.

Nearly three weeks after Cecere was hospitalized she told WPXI that she is doing occupational and physical therapy at Jefferson Hospital but still had no feeling in either leg and can only move the left one. She was given a prosthetic brace and knee support to keep her leg straight. The single mother had regained strength in her upper body, she told the news station, but still felt weakness in her left hand and was unable to lift her daughter.

“It’s discouraging not having the feeling or sensation in my legs. It’s just difficult for me to grasp and understand,” Cecere said.

“I was told multiple times that the diagnosis was an acute distress to the nervous system brought on by the COVID-19 vaccine Pfizer,” Cecere told Channel 11, but her discharge papers did not mention her COVID-19 vaccine.

“It doesn’t sound like they are willing to attribute it to the vaccine or any specific medical diagnosis,” local infectious disease doctor Dave Weber told the news channel.

However, the Centers for Disease Control and Preventions Vaccine Adverse Event Reporting System (VAERS) has received 1,619 reports of events following COVID-19 vaccination that include paralysis or paralyzing conditions such as Guillain Barré Syndrome, transverse myelitis, acute disseminated encephalomyelitis, and Bell’s Palsy, a condition that causes face muscles to paralyze, marked frequently by a drooping mouth and inability to close one eye. Of those reports, 794 relate to Pfizer’s COVID vaccine, including 131 reports of paralysis among patients aged 30-39 years old as of April 30. The CDC stresses that VAERS reports do not establish a causal link between a vaccine and an adverse event.

Just as public health agencies say that vaccines cannot be counted on to provide full protection within two weeks of shots because the immune system has not fully responded, immune system adverse events can take time to build as the body produces antibodies.

Among the dozens of reports among those aged 18 to 29 was a physician report of a 21-year-old in Michigan who received a first dose of Moderna’s vaccine in March and subsequently began experiencing “ascending paralysis” nine days later.

The young man’s condition “rapidly escalated requiring intubation and mechanical ventilation” according to the VAERS report. He was treated for Guillain-Barré Syndrome, the report stated, and had “flaccid paralysis and lost his ability to protect his airway.” The report stated that he would likely need a tracheostomy – a surgical opening in the neck to allow air to enter the lungs via a tube.

Another physician report to VAERS described a 26-year-old who received her first dose of Pfizer’s vaccine in March and three days later began feeling numbness in her toes that spread to her legs. Five days later she noticed numbness in her fingers and her mouth and weakness in her arms. A few days after that, she noticed that her face was dropping on the right side and she went to the emergency departments where a lumbar puncture (spinal tap) test indicated Guillain-Barré Syndrome and she was started on IV immune globulin treatment.

Pfizer has sent LifeSiteNews the following statement in response to questions about the reported incidents of paralysis following its vaccine:

We closely monitor all such events and collect relevant information to share with global regulatory authorities. At this time, our ongoing review has not identified any safety signals with paralysis and the Pfizer-BioNTech COVID-19 vaccine.

To date, more than 200 million people around the world have been vaccinated with our vaccine. It is important to note that serious adverse events that are unrelated to the vaccine are unfortunately likely to occur at a similar rate as they would in the general population.