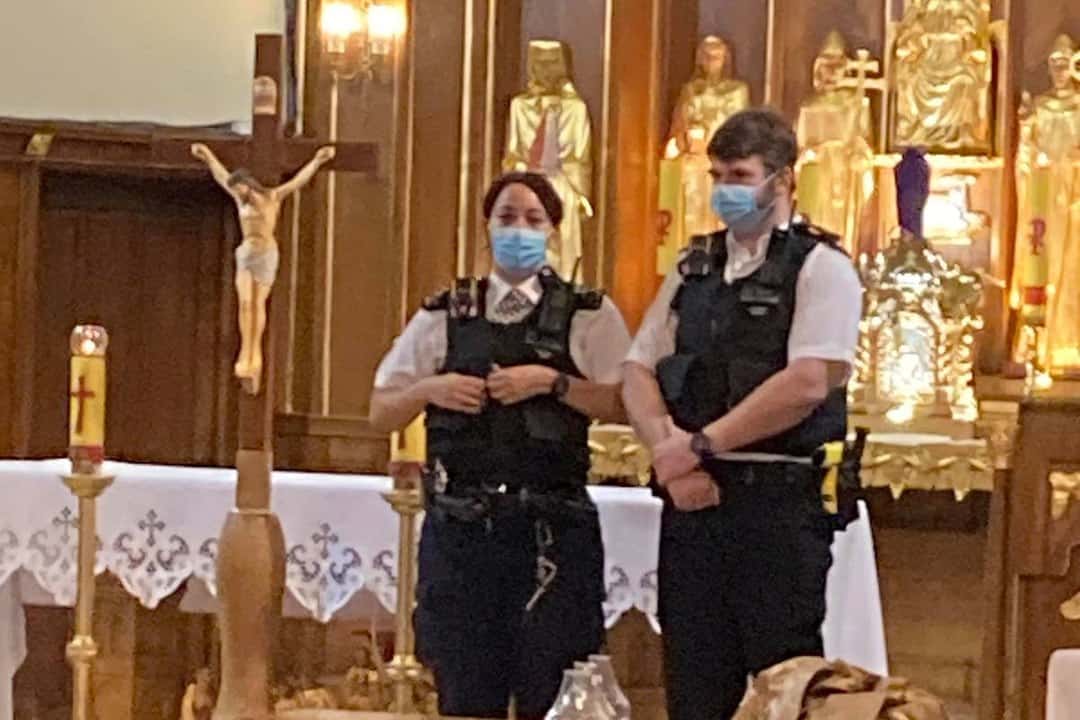 The sight of police closing down a church service is one of the worst moments of this national panic.

I am more and more sure that this country is suffering a revolution in which much that we used to know and believe is being quietly, insistently destroyed.

But Scotland Yard’s raid on the Church of Christ the King in Balham, South London, was especially distressing, not least because most of the congregation there are Polish, from a country where the Christian religion was only recently freed from state harassment.

When I travelled and lived in Communist countries, churches were one of the few fortresses of resistance against the overwhelming power of those secret police states.

It was from the Gethsemane Church in East Berlin that some of the first and bravest demonstrations began against that iron tyranny, and I will never forget the night police surrounded the shabby redbrick building to intimidate an open protest against the regime.

But most potent of all was the revolt by the Polish Roman Catholic church against the squalid, thuggish government imposed on that country by Moscow. It seemed as if it was uncontrollable. Poles were consumed with delight that a son of Poland, John Paul II, had become Pope, and so they behaved like free men and women even though their land was still officially a Communist prison.

Their path from Soviet darkness back into the light of liberty looks easy now that Polish Communism is a memory and the vast Soviet armed forces are nothing but rust. But it was not so then.

The church was endlessly oppressed. One outspoken priest was actually murdered in a gangster-like killing by the secret police, dumped in a lake with a stone tied to his legs, after a terrible beating. The Communists hated Christ, and God in general, because they wanted the people to worship them instead. They rightly saw the church as a rival.

Here it is, of course, different. The Johnson Government’s restriction of religion during the past year has taken the form of contemptuous indifference. They themselves are uninterested in such things, and have no idea how insulting their actions have been to those who acknowledge another power, higher than them.

The largely useless leaders of the churches have done almost nothing to fight for their freedom, leaving the task to the little platoons who in fact keep the whole thing going.

I have felt this pretty keenly myself, but have said little about it till now (apart from the inexcusable prevention of Remembrance services last year) because I sought to keep the fight against the subversion of our society as broad as possible.

But the sight of police officers ordering a church full of people to go home, in the middle of Good Friday devotions on the most solemn day of the Christian year, was just too much for me. There stood these paramilitary social workers in their stab vests and face masks. One of them appeared to have her handcuffs at the ready in her belt, standing with arms folded inside the altar rail. In bureaucratic newspeak, her male colleague intoned the Covid regulations, and out they all filed.

I was not there and am not qualified to say if the regulations were broken, but the Church says not. In my experience, church leaders are painfully vigilant about such things, and churches themselves are very large and airy – pictures of the Balham church show a whopping great barn with a high roof.

So why, of all the places in London, on all the days of the year, was this one targeted on Good Friday?

I don’t think much thought went into it. I think deep down in the brain of the state is an idea that religious people, especially Christians, shouldn’t think they have any special position in Britain any more.

Worship the new Health and Safety State first, and when you’ve done that we might allow to you worship God, not in the way you want to, but in the way we let you.

If they’d come in with clubs swinging and Communist emblems on their cap-badges, I suspect the Poles of Balham would have thrown them out. But, like so many of us, they still treasure the illusion that this is a free country.

And so they submit to things they’d never take from an invader or a more obvious oppressor. It turns out that free countries are incredibly easy to turn into despotisms, because nobody can believe what is happening.