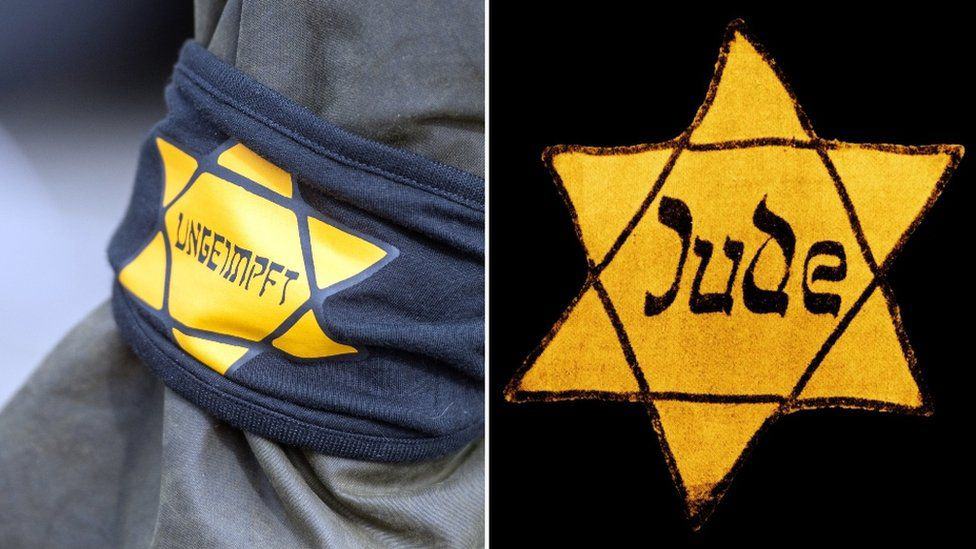 The German federal government anti-Semitism Commissioner Felix Klein [aka some government apparatchik] on Friday called on states and municipalities to prohibit the wearing of a yellow star of David during demonstrations. Legal action must be taken against this, Klein suggested. In the past, Klein said that wearing the repurposed Jewish stars was a “calculated breaking of a taboo.”

Protesters in cities across Germany have been wearing yellow stars with the word “ungeimpft” (unvaccinated) on them. The color and the font are almost identical to the badges Jews were forced to wear across Nazi-occupied territories during the Holocaust, with the result equating the protesters’ situation with the persecution of Jews during the Nazi era.

“If people attach so-called Jewish stars to demonstrations and thus draw comparisons that trivialize the Holocaust, regulatory law should be used against it,” Klein told the Berlin Tagesspiegel.

The anti-Semitism Commissioner referred to the city of Munich, which had banned wearing a yellow star as a condition in dispensing rally permits. “I hope that other cities will follow Munich’s example,” he recommended.

In view of the significantly increased number of anti-Semitic crimes in Germany, Klein said, he was calling on people to take action against anti-Semitism in everyday life. “Indifference is our greatest enemy,” said the Commissioner. “We need a vigilant, defensive, courageous civil society. The state alone cannot fix it.”

Klein said the figures were frightening but unsurprising, as in times of crisis people were more open to “irrational explanations, including anti-Semitic stereotypes” from all ends of the political spectrum ranging from the far right, conspiracy theorists as well as by the left.