·         Existing safety guidelines have omitted too many factors to accurately quantify the risk of airborne transmission, such as time, mask use and ventilation rates. 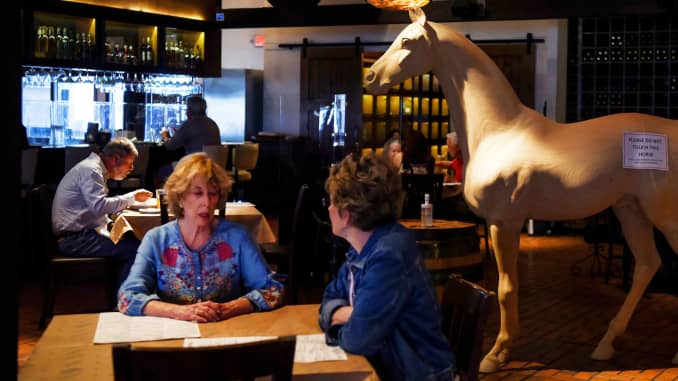 The risk of being exposed to Covid-19 indoors can be as great at 60 feet as it is at 6 feet in a room where the air is mixed — even when wearing a mask, according to a new study by Massachusetts Institute of Technology researchers who challenge social distancing guidelines adopted across the world.

MIT professors Martin Z. Bazant, who teaches chemical engineering and applied mathematics, and John W.M. Bush, who teaches applied mathematics, developed a method of calculating exposure risk to Covid-19 in an indoor setting that factors in a variety of issues that could affect transmission, including the amount of time spent inside, air filtration and circulation, immunization, variant strains, mask use, and even respiratory activity such as breathing, eating, speaking or singing.

Bazant and Bush question long-held Covid-19 guidelines that recommend 6 feet of distance between people from the Centers for Disease Control and Prevention in a peer-reviewed study published earlier this week in Proceedings of the National Academy of Science of the United States of America. They say staying 6 feet away from another person may not be enough when people are inside for prolonged periods of time.

“We argue there really isn’t much of a benefit to the 6-foot rule, especially when people are wearing masks” since everyone in the room is breathing the same air, Bazant said in an interview. “It really has almost no physical basis because the air a person is breathing while wearing a mask tends to rise and comes down elsewhere in the room so you’re more exposed to the average background than you are to a person at a distance.”

Without masks, however, Bazant said 6 feet would provide some additional protection against Covid-19 versus 3 feet. That’s particularly true if a person is breathing directly in your direction, creating what scientists call a “respiratory plume,” like a puff of smoke from a smoker. Their research was based on models that assume the air in the room is “well mixed” and that “the pathogen is distributed uniformly throughout,” they said in a follow-up statement to CNBC on Monday.

In well-mixed spaces, “one is no safer from airborne pathogens at 60 feet than 6 feet,” they said.

The important variable CDC and World Health Organization guidelines have overlooked is the amount of time spent indoors, Bazant said. The longer someone is inside with an infected person, the greater the chance of transmission, he said.

Opening windows or installing new fans to keep the air moving could also be just as effective or more effective than spending large amounts of money on a new filtration system, he said.

Bazant also says that guidelines enforcing indoor occupancy caps are flawed. He said 20 people gathered inside for one minute is probably fine, but not over the course of several hours, he said.

Small, poorly ventilated spaces where a lot of people spend a lot of time together places people at the most risk, he said.

“Unfortunately, the nursing home is one of those cases. If Covid patients are living together 24/7, in some cases even in the same room, that is the absolute worst-case scenario, especially given the vulnerability of that population,” Bazant added.

On the other hand, their analysis shows that many places that were shut down didn’t necessarily need to close, he said.

“Often times the space is large enough, the ventilation is good enough, the amount of time people spend together is such that those spaces can be safely operated even at full capacity and the scientific support for reduced capacity in those spaces is really not very good,” Bazant said, citing some university classrooms. “I think if you run the numbers, even right now for many types of spaces you’d find that there is not a need for occupancy restrictions.”

Social distancing and occupancy rules that have resulted in closed businesses and schools are oversimplified, according to Bazant.

“This emphasis on distancing has been really misplaced from the very beginning. The CDC or WHO have never really provided justification for it, they’ve just said this is what you must do and the only justification I’m aware of, is based on studies of coughs and sneezes, where they look at the largest particles that might sediment onto the floor and even then it’s very approximate, you can certainly have longer or shorter range, large droplets,” Bazant said.

“The distancing isn’t helping you that much and it’s also giving you a false sense of security because you’re as safe at 6 feet as you are at 60 feet if you’re indoors and the air is getting well mixed. Everyone in that space is at roughly the same risk, actually,” he noted.

Pathogen-laced droplets travel through the air indoors when people talk, breathe or eat. It is now known that airborne transmission plays a huge role in the spread of Covid-19, compared with the earlier months of the pandemic where hand-washing was considered the leading recommendation to avoid transmission.

Those droplets from a person’s warm exhalation mix with body heat and air currents in the area to rise and travel throughout the entire room and put everyone in a well-mixed room at risk of airborne transmission.

People seem to be more exposed to that “background” air than they are by droplets from a distance, like secondhand smoke, according to the study.

Masks work in general to prevent transmission by blocking larger droplets, therefore larger droplets aren’t making up the majority of Covid infections when most people are wearing masks. The majority of people who are transmitting Covid aren’t coughing and sneezing, they’re asymptomatic, Bazant said.

Masks prevent indoor transmission by both filtering exhaled infectious droplets and blocking exhaled jets of air, best visualized by imagining someone exhaling smoke. Exposure to these jets of infectious air results in a higher risk of transmission, relative to that of the well-mixed background, Bazant said he and Bush determined in an earlier study.

Those in the same room as a smoker are heavily affected by the secondhand smoke that makes its way around the enclosed area and lingers. The same logic applies to infectious airborne droplets in well-mixed room, according to the study. When indoors and masked, factors besides distance can be more important to consider to avoid transmission.

Though Bazant and Bush’s study didn’t specifically look at outdoor transmission, Bazant said social distancing makes little sense outdoors since warmer air that’s exhaled tends to rise and any infected air would be swept away by the wind.

“Air follows the path of least resistance and often times with many masks, that’s straight up,” Bazant said. “Exhaled air is obviously much warmer than the background and tends to rise. That’s, by the way, the main reason that distancing outside makes almost no sense, and especially with masks, it’s even kind of crazy because you’re really not going to transmit to someone at 6 feet.

“If you look at the air flow outside, the infected air would be essentially swept away and very unlikely to cause transmission. There are very few recorded instances of outdoor transmission,” he said. Though rare, he said it’s always possible to contract Covid-19 outdoors, especially at crowded venues like concerts. “Crowded spaces outdoor could be an issue, but if people are keeping a reasonable distance of like 3 feet outside, I feel pretty comfortable with that even without masks frankly.”

As for variant strains that are 60% more transmissible, increasing ventilation by 60%, reducing the amount of time spent inside or limiting the number of people indoors could offset that risk, he said.

Bazant also said that a big question that is coming will be when masks can be removed, and that the study’s guidelines can help quantify the risks involved. He also noted that measuring carbon dioxide in a room can also help quantify how much infected air is present and hence risk of transmission.

“We need scientific information conveyed to the public in a way that is not just fearmongering but is actually based in analysis,” Bazant said. After three rounds of heavy peer review, he said it’s the most review he’s ever been through, and that now that it’s published he hopes it will influence policy.

Bush and Bazant issued a statement to CNBC on Monday clarifying some of Bazant’s previous comments.

“Our study indicates that the six-foot rule is insufficient to limit indoor airborne transmission of COVID-19: one must also limit the time spent in an indoor space. Our study demonstrates how this time limit depends on the relevant factors, including room ventilation and filtration and face-mask use,” they said, noting that “face masks can be an extremely effective indoor safety measure.”

Editor’s note: The headline and article were updated to add more quotes and context to the scientists’ findings and opinions. Bazant said his comments on outdoor transmission were his opinion, not the formal findings of the study.