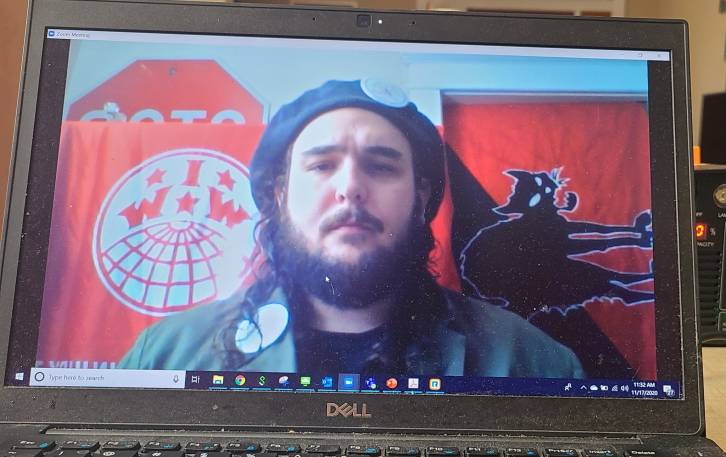 Esteban Gil, the Southern Poverty Law Center’s Program Director in New Orleans, is indignant. The SPLC “union” is not getting its fair share of the pie.

Gil recently appeared in negotiations with SPLC leadership dressed up like Fidel Castro and flanked by the flags of anarcho-communist (“antifa”) groups, the IWW and the CNT, to negotiate a pressing labor issue at the neo-liberal non-profit juggernaut: the snacks leave much to be desired.

The self-described “organizer” and “syndicalist” whose twitter promotes extremist anarchist ideas going back almost a decade is representing his fellow SPLC staff members across five states in calling for CEO Margaret Huang and Chief of Staff Lecia Brooks to provide workers with pizza and ice cream instead of smaller meals under the hashtag #NoSnacks.

While normal observers may assume this display is satirical, the fad of cosplaying as union organizers has grown among “social justice warriors” in bourgeois cultural professions.

A journalist who recently was driven out of a left-wing organization told National Justice that the relatively new phenomenon of “unions” being formed by Antifa types in places like the Huffington Post, the ACLU, and even Harvard Grad School are not primarily interested in pay, health care or other genuine labor issues, but rather in ganging up on liberal colleagues who may be more moderate in their views on race and sexuality than “woke” Millennials affiliated with anarchist and communist groups.

In other cases, the “unions” work to purge white men from positions of influence at their work place no matter how woke they are. A good example of this dynamic came in 2018, when the Mic Union demanded the firing of Jack Smith IV over claims that he was sexually unfaithful and sometimes argued with women he was dating.

Left-wing non-profits have profited handsomely from liberal donors during the Trump administration after four years of a 24/7 media blitz claiming the president is a Fascist. For the SPLC and ACLU, their poorly paid army of bloggers and paralegals are also wondering why they have to rely on their trust funds or their parents to make a living.

But the NGO’s themselves are working to nip this in the bud. The “social justice” megaliths have been utilizing aggressive and expensive union busting tactics to undermine the demands for better pizza and even more extreme anti-white positions from younger cosmopolitans pretending to be Bolshevik revolutionaries.

While wealthy liberals are certainly opposed to these unions for financial reasons, they are also looking to pivot away from “antifa” type extremism after Trump’s defeat. The “SJWs,” while useful during a time they saw as an existential threat to their power, are now only a liability to their plan to restore the Clinton/Obama status quo under Biden.