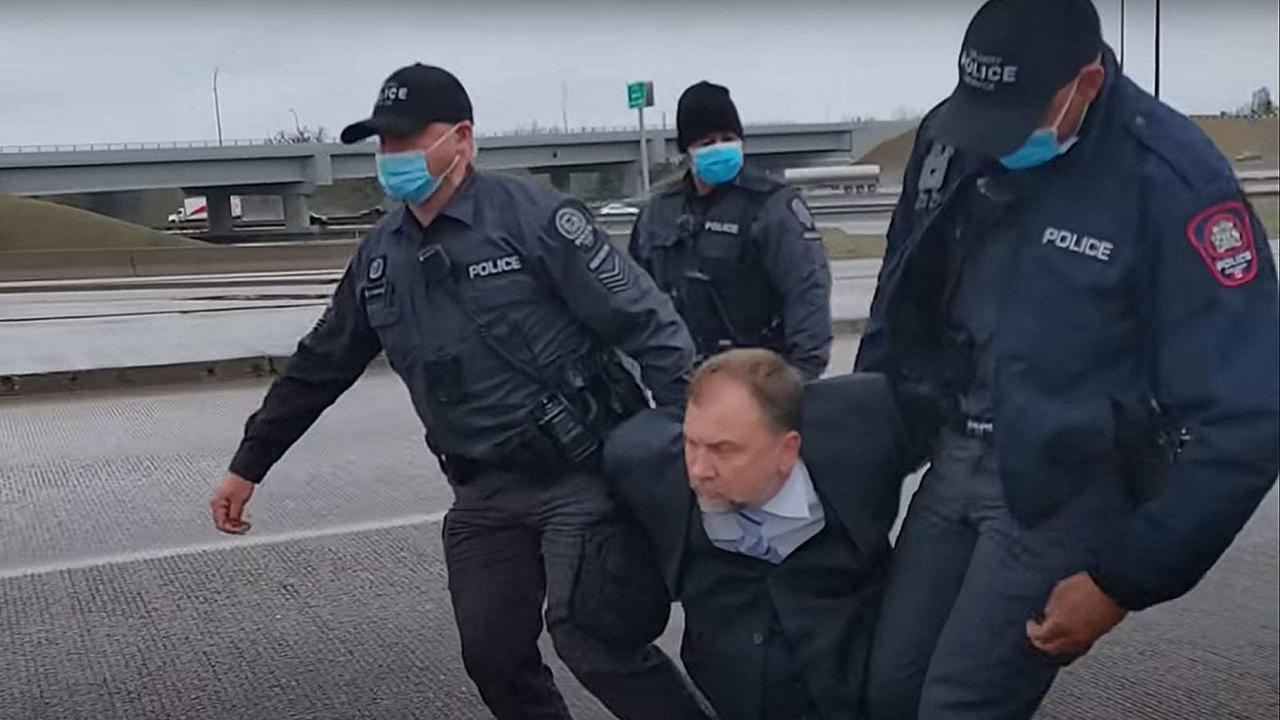 Pastor Artur Pawlowski, a resident of Calgary, Canada, has been a thorn in the flesh of Alberta Health Services (which is the equivalent of an American state’s health services) since the Covid pandemic began. Pastor Pawlowski had the temerity to believe that the Canadian Constitution meant it when it said that everyone has a fundamental freedom of conscience, religion, and peaceful assembly. When the government tried to shut him down over a virus with an average 98% survival rate, he vociferously resisted. The government got its revenge yesterday.

Canada has been extraordinarily aggressive in policing its citizens over a virus that has a 98% survival rate. People who have traveled overseas must stay in designated hotels, where they get abysmal service, for prices that would keep someone comfortably at the Ritz in New York, back in pre-Covid days. You can read more about Canada’s eerie police state feel here.

One of the things that most irks the Canadian government, both national and provincial, is church worship. Americans became aware of that thanks to a viral video in April showing Pastor Artur Pawlowski, who grew up in Communist Poland, calling the Canadian police “Nazis” for entering his church and trying to disrupt the service. His crime? Conducting a worship service that exceeded the 15% capacity limit that Canada now imposes on religious worship.

Pastor Pawlowski clearly believed he was entitled to the benefit of the Canadian Charter Of Rights And Freedoms, which is an integral part of the Canadian Constitution. Sections 1 and 2 of that charter state in their entirety as follows:

Rights and freedoms in Canada

1 The Canadian Charter of Rights and Freedoms guarantees the rights and freedoms set out in it subject only to such reasonable limits prescribed by law as can be demonstrably justified in a free and democratic society.

2 Everyone has the following fundamental freedoms:

Somewhere along the line, the Canadian government thought that it was a “reasonable limit” to keep 85% of religious people from attending worship in a “free and democratic society” because of a virus with a 98% survival rate. I don’t mean to denigrate those who have died from China’s manufactured virus. I simply want to point out that, in the grand scheme of things, Western societies have managed to make Covid fairly inconsequential.

After their first unsuccessful foray to block worship services, the police came back last week with a warrant to enter Pawlowski’s church and arrest anyone they wanted who refused to leave. Pawlowski again sent them away with a flea in their ear.

The police let Pawlowski conduct a service a week ago Saturday but yesterday they struck. A full congregation appeared at the church, something that must’ve outraged Jason Kenney, who is the premier, or governor, of Alberta province:

When the police arrived, the parishioners kicked them out of the church:

The police got their revenge three hours later, arresting Pastor Pawlowski and his brother as they were heading home after services:

It’s a petty victory but the police are proud of what they have done:

What happened in Canada strongly reminds me of what happened in England in the second half of the 12th century. King Henry II and Thomas Becket had been carousing buddies. However, when Thomas Becket became Archbishop of Canterbury he took his job seriously. He went to war against the King for trying to shift church power away from Rome and the Pope.

Frustrated with Becket, Henry is reputed to have exclaimed “Will no one rid me of this turbulent priest?” Although framed as a question, not an order, four knights rode to Canterbury and stabbed Becket to death.

Overnight, Beckett went from being a prickly, difficult Archbishop, whose loyalty was greater to Rome than to England, to becoming a sainted martyr. Eventually, the Pope banned Henry from hearing mass, and Henry was forced to take the humiliating step of performing a public penance.

I have my doubts about how familiar Canada’s politicians are with the story of Henry II and Thomas Beckett but they might do well to remember that personal vendettas against principled priests are not necessarily a successful tactic for politicians – especially when the politicians have arrogated to themselves massive amounts of power and clearly violated their constitutional obligations in response to what has proven to be a manageable illness in the West.