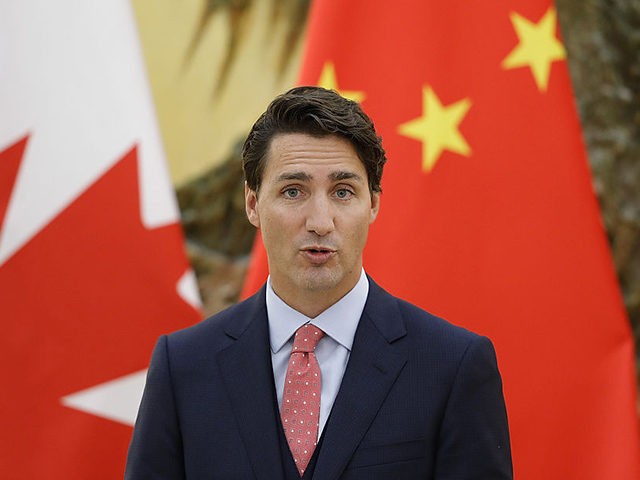 China’s Ambassador to Canada, Cong Peiwu, warned the country on Thursday that, if Ottawa cares about the “health and safety” of Canadians, it will not extend a hand to help Hong Kong refugees fleeing a wave of communist repression.

Leftist Prime Minister Justin Trudeau had warned China in remarks this week that Canada would not accept “coercive diplomacy” and that Ottawa would publicly condemn China for human rights abuses both in Hong Kong and in Xinjiang, a western province where evidence suggests the Chinese Communist Party (CCP) has placed as many as 3 million people in concentration camps.

In Hong Kong, China unconstitutionally ended the region’s autonomy in May with a “national security” law that essentially outlawed criticism of the CCP there. CCP-controlled police have increasingly used the law to arrest pro-democracy dissidents for engaging in peaceful protests against China. At its peak, the anti-communist protests in the city attracted 2 million of Hong Kong’s 7 million people. Police have also hinted that they may use the law to prosecute hundreds of thousands of people for voting in pro-democracy party primaries this year.

Hong Kong’s Basic Law, its constitutional document, prohibits China from imposing any laws on it passed in Beijing. The current Hong Kong government has chosen to disregard this provision and enforce the “national security” law.

Cong, the ambassador to Ottawa, threatened Canadian citizens in remarks observing the anniversary of diplomatic relations between the two countries.

Despite Trudeau’s remarks, Canadian immigration services have yet to make a concrete declaration on the status of Hong Kong refugees. At least one couple did receive political asylum in Canada after fleeing Hong Kong; another 45 cases are reportedly pending.

“The Chinese embassy in Canada just made clear our just position on issues relating to Hong Kong. It is beyond reproach. If anyone is misinterpreting this, then you should ask for the reason and find out if there are ulterior motives involved,” spokesman Zhao Lijian, who spread a conspiracy theory that the U.S. Army is responsible for the Chinese coronavirus pandemic, told reporters.

Canadian officials responded with outrage to the threat (when asked, Cong did not deny that his remarks were a threat).

“The reported comments by the Chinese ambassador are totally unacceptable and disturbing,” Foreign Affairs Minister François-Philippe Champagne said in response. “I have instructed Global Affairs to call the Ambassador in to make clear in no uncertain terms that Canada will always stand up for human rights and the rights of Canadians around the world.”

Champagne is embroiled in an ongoing scandal, erupting in June when Canadian media reported that he possessed two outstanding mortgages with the Bank of China, a state company. The reports surfaced after Champagne issued praise and thanks to China for sending the country faulty medical equipment for use to fight the Chinese coronavirus.

Trudeau’s remarks on Tuesday against the Chinese government deviated significantly from his typical diplomacy. Like Cong’s, they were meant to mark the anniversary of Chinese-Canadian relations.

“We will remain absolutely committed to working with our allies to ensure that China’s approach of coercive diplomacy, its arbitrary detention of two Canadian citizens, alongside other citizens of other countries around the world, is not viewed as a successful tactic by them,” Trudeau said.

The prime minister was referring to the arbitrary arrests of Michael Spavor and Michael Kovrig in China on dubious charges of “espionage.” The arrests closely followed Canada’s detention of Meng Wanzhou, the CFO of Chinese telecommunications giant Huawei. Meng is awaiting extradition to the United States over evidence that she actively violated sanctions on Iran. Chinese state media has been largely transparent about the true purpose of keeping Spavor and Kovrig behind bars, threatening Canada and urging it not to “sabotage” China.

Amnesty International has verified that the two Canadians have endured “obvious violations to their rights to a fair trial,” rendering the legal process illegitimate.

“We firmly deplore and oppose the Canadian side deliberately confusing right and wrong and once again making erroneous comments, and we have lodged stern representations,” spokesman Zhao Lijian said.

Zhao plainly stated that all tensions between China and Canada “are caused by Canada’s arbitrary detention of Meng Wanzhou, an innocent Chinese citizen who hasn’t breached any Canadian law.”