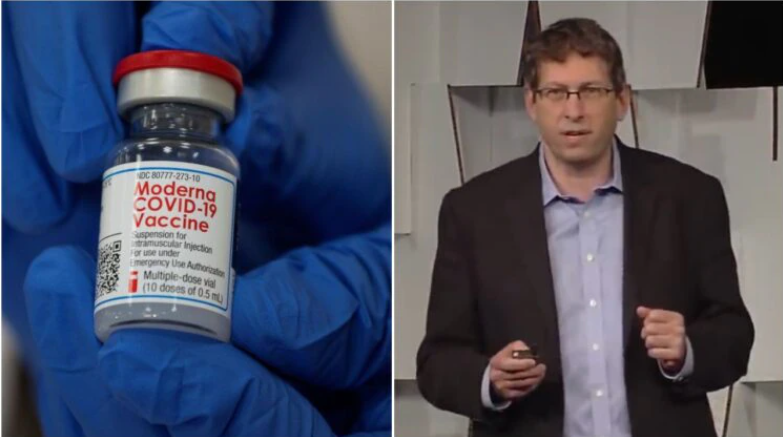 A video from a 2017 Ted Talk is going viral featuring a top executive with pharmaceutical giant Moderna admitting that his corporation’s mRNA jabs can edit the genetic code of individuals who are stuck with the experimental shots.

“We’ve been living this phenomenal digital and scientific revolution, and I’m here to today to tell you that we are actually hacking the software of life,” said Tal Zaks, the chief medical officer for Moderna.

“If you could introduce a line of code or change a line of code, it turns out that has profound implications from everything from the flu to cancer,” Zaks added, talking up his firm’s mad science experiments.

This is when Zaks described how an mRNA vaccine edits the genetic code of individuals who are stuck with the vaccine.

“Now imagine if instead of giving the protein, we would give the instructions on how to make the protein, how the body can make its own vaccine. That’s an mRNA vaccine,” he said.

“For the last several years, we have shown this actually works in a whole multitude of animal models. Earlier this year, we published the first actual study in people… We took a group of volunteers and injected them with a messenger RNA vaccine,” Zaks continued.

“And now we’re going to be developing a whole slew of vaccines,” he added.

Big League Politics has reported on how pharmaceutical giants like Moderna are shielded from liability if their experimental vaccines cause unforeseen negative side-effects:

“The US government has granted Pfizer and Moderna immunity from liability in case people develop severe side effects from their COVID-19 vaccines.

The Public Readiness and Emergency Preparedness (PREP) Act allows the Department of Health and Human Services to provide liability immunity for “certain medical countermeasures,” such as vaccines, except in cases of “willful misconduct.”

According to CNBC, someone who develops severe side effects from a COVID-19 vaccine can neither sue the FDA for authorizing the vaccine, nor one’s employer for mandating it.

And although it is theoretically possible to receive money from the government to cover lost wages and out-of-pocket medical expenses following “irreparable harm” from a vaccine, only 29 claims—6 percent of all claims—have received compensation over the past decade.

A significant chunk of the American populace still claims that they’re not willing to take the vaccine, so it will be intriguing to see how this situation develops and if the vaccine becomes either mandatory de jure or de facto.”

Moderna is one of many firms set to make billions, if not trillions, off of the COVID-19 vaccine regime. Big Pharma does not want the masses to understand the risky and unethical experimentation they are engaging in to produce these vaccines.